Start a Wiki
Madeline "Maddie" Walker-Fenton is the very beautiful wife of Jack Fenton and the mother of Jazz, Danny, and Dani Fenton. She is a scientist and ghost hunter just like her husband Jack, only that she is way more capable than him. She is considered to be one of the few humans who can actually give some trouble to Danny if she decides to hunt him.

She has short bob-cut light brown hair and light violet-purple eyes. She stands at 5'9 and has a sturdy build. She is always seen wearing a blue jumpsuit with long black gloves and boots and a black belt with one pouch. She is sometimes seen wearing her jumpsuit hood.

Maddie which is short for Madeline, which was revealed in Maternal Instincts, and is an accomplished ninth degree black belt in various martial arts, and a very sharp marksman and technical whiz. Maddie, despite her obsession with ghosts, absolutely loves her family and will do anything to defend them. Maddie has known both Jack and Vlad since college, and during that time had been unaware of Vlad's feelings for her. Even in the present, she views Vlad as just a friend, despite Vlad's attempt to amend that opinion. In Maternal Instinct, Vlad declares his feelings to Maddie, feelings which Maddie does not return nor appreciate- especially when he speaks poorly about Jack. After this, Vlad falls into Maddie's ill-graces. In Reign Storm, when Vlad seemed to claim to have saved Danny's life, Maddie's opinion of Vlad improves out of gratitude, but she continues to harbor a mixed opinion towards him; it has since been consistently shown that she still doesn't trust him. Maddie has always stayed true to her family and she always defends Jack against Vlad whenever Vlad has spoken ill of him. Danny used to be really close with Maddie when he was little and despite not being as close to her now, still loves and looks up to her. Danny's mother is a firm believer in what can be strongly evidenced or scientifically proven in the Danny Phantom universe, that includes ghosts and is more rational than her husband. Like Jack, she's none too friendly towards ghosts, though she's not quite as fond of destroying them outright. In her own words, "Well, we can't completely vaporize it. Don't you want to at least examine the remains?" That outlook completly changes once Danny reveals his secret to both his parents and the world leaders in Phantom Planet, now choosing only to hunt down virtually evil ghosts instead of the good ones, including the neutral ones. She later on adopts Danielle after finding her hiding out in Vlad's old home in Wisconsin.

Maddie is a ghost hunter along with her husband Jack, even though she is better at it than he is. Not much of Maddie's past is revealed outside of her college days when she was friends with Vlad and Jack. The three worked on a Porto-Ghost Portal that backfired and caused Vlad to come down with Ecto-Acne. This was due to Jack looking at her instead of his work, causing him to accidentally spill cola into the machine instead of ecto-purifier. Afterwards, Jack married Maddie and they had three children: Jazz Fenton, Danny Fenton, and Dani Fenton. Despite her beauty, she is a technical genius, who was interviewed by Genius Magazine, but was not included in it once she started talking about her interest in ghosts. Taking on a primarily maternal role, aside from paranormal science and ghost hunting, with which both combined are a very close second, Maddie also serves as the more rational parent and shows much more concern for her children's welfare than her husband. That said, she has extreme obsession whenever it concerns ghosts and poses a large threat to ghosts. Unlike Jack who merely wants to rip them apart, Maddie believes in a more scientific approach, preferring to examine them. Of course, she often unknowingly makes Danny nervous whenever she talks about how she wants to dissect a ghost or study the remains after she blasts them to tiny bits. In The Fright Before Christmans, it is revealed Maddie does not believe in Santa Claus, leading to multiple arguments with her husband who does, and leaving Danny very depressed over it. In Masters of All Time, Danny tries to alter the past so that the lab accident 20 years prior would never happen and thus cause Vlad Plasmius to not exist. However, he ended up creating an alternate world where his father is Jack Plasmius and his mother is married to Vlad and keeps her ghost-hunting obsession a secret from him. The timeline is changed to normal when Danny manages to tell both his parents about this false reality. Maddie had sent Danny through her ghost portal where he managed to get reality fixed to what it originally was. Both she and Jack have learned on four separate occasions that their son is part ghost. The first time was when Dan Phantom/Dark Danny revealed his secret. The second was during an alternate timeline as Vlad Masters wife in Masters of all Time . The third was when Freakshow was after the reality gems. And lastly, the fourth was near the end of Phantom Planet Only that last time did they and to the current United Nations who now know permanently, however. Still, in Reality Trip, she accepted Danny's half-human half-ghost nature, for the short time that she knew. In Girls Night Out, it is revealed that Maddie sometimes works on her own set of inventions one example shown in the episode was the Maddie Modulator, a device to alter spectral frequency and reverse the process. Usually she doesn't have time to work on them because she has to deal with fixing everything Jack breaks. Unlike Jack, Maddie often takes a more proactive role in fighting ghosts, using a multiple styles of martial arts in which she is currently a ninth degree black belt and high-tech gadgets that Jack can build, but can never quite use correctly. In Prisoners of Love it's revealed that Maddie has a sister named Alicia, who lives by herself in a cabin in the isolated woodland town of Spittoon, Arkansas and has been divorced for a decade. She grows rhubarb, makes her own lemonade and chops her own firewood. She clearly doesn't like Jack, and her feelings towards her nieces Jazz, Dani and her nephew Danny were never touched upon. She states that intelligent women run in her and Maddie's family, and she was voiced by Grey DeLisle. Alicia's maiden name or married name for that matter along with Maddie's maiden name and other members of their side of the family have not been revealed.

Jack Fenton is Maddie's husband and college sweetheart. They both have an obsession with ghosts and ghost hunting in general, which was why they decieded to try dating each other and later actually fell in love with one another. Unlike Jack who merely wants to rip them apart, Maddie believes in a more scientific approach, preferring to examine them. In the alternate timeline where Danny had changed the past so Vlad Pasmius wouldn't exist, but instead caused a ripple effect on his future. Maddie had married Vlad and Jack was left behind. It is later shown in the episode that even though she was married to Vlad, she still held deep feelings for him, and didn't care that he was half-ghost at all.

When Danny was a child they had shared an unbreakable to connection, it had changed when he was turned into a hybrid though. Later on in Maternal Instinct that managed to rekindled their relationship again. In Phantom Planet when Danny had revealed his secret to the United Nation World Leaders, Valerie, and his parents. She happily hugged him open arms, which was foreshadowed in Reality Trip when his secret identity was accidently revealed to the world.

Although, it does show that they have a close relationship in the series itself; she loves her daughter no matter what. They later form a much deeper bond in Girl's Night Out when all the men in Amity Park had vanished while both Danny and Jack were on a fishing trip in Lake Eerie.

She once said that Dani reminds her Danny when he was her age and thus repeatedly dots on her anytime she can get. When she and her family had found the orphaned Dani living in Vlad's old Wisconsin mansion when they were hired to get rid of the ghost there aka Dani. She and Jack later legally adopted her they share a very deep connection of mother-daughter realtionship because of the fact Dani has never had a mother before. She is also is acceptable of the fact that she is also a hybrid.

She is shown to despise and hate him with just as much disgust as Danny and his friends do. In the alternated timeline Maddie was married to him; but it seems as though he treated more as a trophy wife than anything else. She believes him to be a pervert and a fruit-loop as everyone else calls him, he seems to also have an unhealthy obsession with trying to kill Jack and marrying her. He even named his pet cat after her. 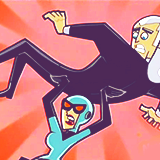 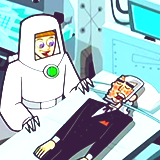 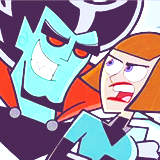 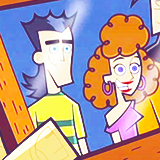 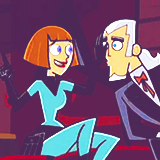 Add a photo to this gallery
Retrieved from "https://blossom.fandom.com/wiki/Maddie_Fenton?oldid=17696"
Community content is available under CC-BY-SA unless otherwise noted.