Start a Wiki
Jasmine "Jazz" Fenton is the oldest, intelligent child of Jack and Maddie Fenton, and the elder sister of Danny Fenton and Dani Fenton.

Jazz is a very beautiful teenage girl with aqua blue eyes and long orange hair that reaches down to her hips. She sports a long-sleeve v-neck black shirt, aqua pants, a pair of simple black flats and an aqua headband. Other than wearing a black tank top in one episode and two different Ember costumes, she is one of the character with less change of outfit.

Danny may have the superpowers in his family, but Jazz has the brains and social skills. She started off the show as the intelligent older sibling who immediately berates her parents' "sick obsession" with ghosts as well as often overprotecting Danny to the point of annoyance while viewing herself as the most normal member of the family. Jazz eventually accepts that ghosts are real, sentient beings when she finds out about Danny's dual identities once she sees him transforming behind the Nasty Burger. Danny, however, is unaware that she has witnessed him transforming and discovered his secret. At first, Jazz tries to question Sam and Tucker, Danny's friends, but she soon realizes that they would not betray Danny's secret. When Danny rescues her by the next day while in ghost form, Jazz pretends to be scared of him and runs away, proclaiming, "He'll tell me when he's ready." As a result, Danny has no clue of his sister's own agenda to continuously cover for him when he's out capturing ghosts. Jazz gradually changes in her views of ghost hunting when she is forced to accompany her father in barricading their own home, protecting it from a massive ghost invasion that was sent by Vlad to murder Jack in Maternal Instinct. In spite of her assurance to her dad that ghost hunting is nothing but a social experiment she's trying, she finds herself enjoying it, easily adapting to the Fenton equipments. Jazz eventually embraces her childhood as much as her young adult persona, proving that she doesn't need to be the adult all the time and ultimately creating a balance between the two. While Danny is reworking a desolate timeline so he wouldn't become Dark Danny, he learns that Jazz knew about his secret identity when she sent him a note 10 years into the future to inform him about Vlad where upon Danny recognizes her handwriting and her trademark headband used to secure the note, revealing her knowledge of his secret identity. After defeating Dan, Jazz confesses to Danny, telling him that she's known for a long time, and was waiting for him to reveal his secret on his own terms. Danny and Jazz, in a touching moment, embrace, finally able to get past the secret and reconnect. Jazz begins to try and take a more active role in Danny's ghost fighting, though as well meaning as she can be, her inexperience results in more than a few embarrassing defeats for Danny, like sucking him into the Fenton Thermos multiple times. Danny eventually loses his temper with her about her unnecessary help, upsetting her. To prove Danny wrong, Jazz ventures to the home of Vlad Masters in hopes of helping Danny out, but ends up forced into combat with Danny. After working together to defeat Plasmius, the two smooth out their conflict, Jazz reverting back to her old method of only helping when she's needed and covering up for him. In gratitude, Danny dubs her a member of Team Phantom, a role she plays more fully when she teams up with Maddie and Sam to defeat Spectra, Ember, and Kitty when they overtook Amity Park. With her new found love of ghosts, she expresses it as part of her social life, going as far as writing her college entrance thesis on Ghost Envy. At the end of the series, Jazz reveals the truth about Danny's ghost powers to their parents when she thought he was killed in a crash. Later, when he turns up in one piece, she explains to Danny that their parents know.

Jazz, being the older sister and feeling the most rational of her crazy family, takes it upon herself to be the mature figure, often criticizing her parents obsession with ghosts and protecting her younger brother. While she may not know it, she often uses her intelligence as a means of superiority over others, going completely bonkers if she's shown to be wrong and often using her older sister status to boss Danny around, acting more like a mother than a sister. Simply put, she's more of an adult stuck in a teen's body. Ultimately, she means well, using her knowledge to point her parents in a more normal direction and keeping an overprotective eye on Danny, even if it sometimes is quite an annoyance to others. In The Fenton Menace, when Danny Fenton tears her favorite teddy bear apart, Jazz instantly starts to throw a fit over her stuffed animal, jumping up and down and crying. Jazz eventually develops as the show progresses, starting off as a rather snobbish genius who refuses to be associated with her parents while maintaining a serious attitude, only for her to later discover how much fun ghost hunting is and embracing it, as well as toning down her serious nature and discovering her inner child while still being her supportive self. Her sudden increased interest in ghosts causes Jazz to imply or hint she is suffering from "ghost envy" when she states she desires to be a ghost to get her parents attention. In addition, she develops a deep respect for her brother's selflessly heroic nature and attempts to support him. She helps Danny by continuously covering his identity from suspecting eyes--particularly their parents. She is also terrible at giving ghosts names, (Crate Creep: Box Ghost, Lunch-A-Belle: Lunch Lady, Ghost X: Skulker, Creep Walkers: Sleep Walkers, etc.) and making puns. She is apparently popular in her school and very social, although at one point in The Ultimate Enemy, a group of girls walked away nonchalantly after she expressed her desires to reach a high ranking college. This implies that she doesn't have any friends or maybe she deludes herself and only thinks she has friends. Girls Night Out reveals Jazz is as bad a singer as Tucker, Frightmare reveals that Jazz's dream is to teach at Yale University as a professor, and it is hinted at in Reality Trip that Jazz has a case of "ghost envy" as through out her life the subject of ghosts has gained more of her parents attention then she has, along with the fact that her younger brother has ghost powers.

Prior to the series and revealed in My Brother's Keeper, when Jazz was Danny were younger, they were close and used to talk all the time--before Jazz became, as Danny once states, "a fink." Her relationship with her brother at first seems to be strained as he often views her as snobbish, cold, and annoying no matter how much she tries to bond with him. On her side, she's often worrying about him and protecting him, basically and unintentionally treating him like a helpless child that needs guidance and direction. Over the course of the series, their bond has strengthened with both of them looking out for one another, with Jazz finally realizing Danny is more responsible and mature than she thought.

Jazz wasn't too keen on her parents ghost obsession at the beginning, feeling like the odd man out. Jazz slowly starts to understand her parents' job and ghost obsession when she steps in their shoes, eventually gaining an obsession similar to that of her parents, and her status with having a half ghost brother has presumably upped the ante just as well. She has since come to better respect her parents, if not still criticizing them instead for often overdoing it, like their plans to destroy Danny Phantom. Jack has admitted that Jazz is his favorite even though she looks nothing like him, and it's hinted that Jazz's name was his idea. In the finale, thinking that Danny was killed, Jazz's reaction helps her parents to figure out the connection between their son Danny and the ghost boy.

Although Jazz is never seen with friends of her own age, she has been known to hang out with Danny's friends, sometimes when playing a more active role as a member of Team Phantom. Sam at first is critical towards Jazz, but later warms up to her in Girls' Night Out, the two eventually getting along. Her relationship with Tucker isn't explored as much, but it is clear she thinks of him as a friend. Later on she becomes her best friend.

She encounters Johnny when he rescues her from a runaway roller coaster that he secretly triggered. While winning her over so she could be possessed and be the host for his girlfriend Kitty, he gives her Kitty's scarf and jacket as a gift to Jazz. If Danny had not stopped Johnny in the last minute, Jazz would have been trapped forever in the Ghost Zone.

Jazz meets her little brother's future evil self when he was planning to cheat on the C.A.T. He reveals his true self to her after she admits that she knows his secret identity--much to his surprise--and knocks her unconscious twice during their run-in. Once she realizes he's not the real Danny, she sends younger Danny helpful information and reveals Dan's treachery to everyone at the Nasty Burger.

Jazz is downright one of the smartest characters in the series, a real genius of her own, getting the highest score in the C.A.T. Her IQ is 350.

Being very smart, she is a cunning strategist, and brings a new dimension to Team Phantom (with Danny considered to be a physical threat, while Tucker is the technology expert) that can save them in the most unexpected times. Her strategy skills are useful when she goes undercover to seek out Vlad's secrets in his castle, or to manipulates Freakshow to figure out his weakness, which helps Danny defeat him, and concocts the plan to capture three ghosts and reverse their effects on the town.

At a very young age she has shown to be prominent fighter, especially when it comes to protecting her brother. She has also proven to be a skilled Ghost Hunter, just like her parents, and she has ghost hunting skills in her blood. One time, she defeats a swarm of ghost animals with her father with relative ease and even pleasure.

Jazz's physical ability is an important part of her life and keeping up with her brother. She says she usually does cardio as it is a major factor in her personal upkeep. When in a fight, she has to be able to endure hits and return with ease, though she does it mostly to keep herself healthy. 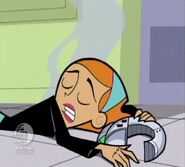 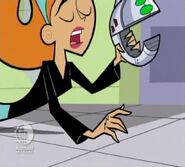 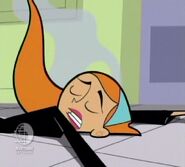 Add a photo to this gallery
Retrieved from "https://blossom.fandom.com/wiki/Jazz?oldid=19695"
Community content is available under CC-BY-SA unless otherwise noted.