Start a Wiki
Jack Fenton is the husband of Maddie Fenton and father of Danny Fenton, Jazz Fenton, and Dani Fenton

Jack is large and bulky, with black hair and blue eyes. He always wears an orange jumpsuit with black gloves and boots. He is seen wearing his jumpsuit hood in two episodes.

His past life before his college days is unknown, although he states in the first episode he was born in a log cabin. He had always wanted a pony, but was discouraged from this because he and his family had to eat horse meat during the war. Whether this is true or not is up for debate, considering that he does love to ramble. He has an ancestor named John Fenton-Nightingale who lived during the time of the Salem Witch Trials, sharing Jack's looks and obsessiveness (towards witches instead of ghosts), indicating that contact with the paranormal seems to run in his family.

During his college days at the University of Wisconsin-Madison, he and Vlad Masters were once best friends, along with Maddie. Both Vlad and Jack were secretly in love with Maddie. In college, they studied science, and were interested in the paranormal. The three of them even built a smaller, early-version of the Fenton Portal during this time, which they called the proto-portal. One day, when the portal was nearly complete, Jack, Maddie, and Vlad gathered to test the portal for the first time. Jack unwittingly filled the Ecto-Filtrator with diet soda, causing the portal to malfunction while Vlad stood directly in front of it. As Jack activated the portal, missing Maddie's warnings that his calculations weren't right, Vlad was hit with a beam of ectoplasmic energy. He came down with a horrible case of 'echo-acne' from which he suffered years in the hospital. Soon after he lost contact with Jack and Maddie, but still held a grudge against Jack. Later, Jack concluded that ectoplasmic contamination cannot give a human any kind of ghost-related abilities. Sometime after college, after an embarrassing proposal by Jack, Jack and Maddie got married. Eventually, Maddie gave birth to their daughter Jasmine, and a few years later, Danny was born. During the next years, although they would occasionally argue over things like Christmas, Jack and Maddie had a good life, working on experiments and raising their children. Over time, prior to the beginning of the series, their interest in ghost hunting would return, and they decided to make a Ghost Portal. Although they thought it didn't work after they had finished it, Danny had explored it and accidentally turned it on. This situation, unbeknownst to Jack and Maddie, resulted in Danny becoming half-ghost.

In Mystery Meat, Jack accidentally mistakes Jazz for being a ghost when she exhibits interest in taking Danny to school. Once Jazz explains to him that he is wrong, Jack announces his plan to stop hunting ghosts, finally starting to believe they don't exist. However, his decision is forgotten when Danny Phantom, the first ghost Jack has ever seen, comes by and takes the Fenton Thermos. After this, Jack is confident that ghosts exist and even more determined to catch one, fishing in the Ghost Portal and working on more ghost-hunting technology. In Bitter Reunions Jack and Vlad are reunited during a college reunion hosted by Vlad, who has become a billionaire, in his castle. Vlad says that he is willing to forget the past, and Jack believes that they are on good terms again. In reality, Vlad still wants Jack dead, and never forgave him for marrying Maddie (the love of his life) and having a happy family with her.

In the episode Masters of All Time, in an alternate reality, Jack was the one in which the lab accident 20 years ago happened to. Jack got the ecto-acne, which transforms him into "Jack Plasmius." This accident happens because Danny had gone back in time to try to prevent the accident from happening so that Vlad would not have become Plasmius. Also in this timeline, Vlad is married to Maddie, but both Jack and Maddie still love each other.

In Phantom Planet, the show's finale, Vlad reveals his identity as a ghost to the entire city. In the climax, Vlad is trapped in outer space near fatal ectoplasmic energy fields which surround him. Begging Jack to let him board his ship, and stating that he would not abandon an old friend, Jack, finally realizing that Vlad doesn't like him, replies "An old friend? No. You? Yes." He shrugs him off and heads off to Earth, leaving Vlad to fend for himself. After learning Danny's true identity as the Ghost Boy, Jack offers to team up with his son, making Danny his 'sidekick.'

Jack is incompetent at times, even coming off as goofy, clumsy, and obsessed with ghosts. Despite this, he is actually quite smart, capable of building working ghost and ecto machines. He is also protective of his family, and jumps at chances for quality bonding. He is a brilliant inventor, but can come off as absent-minded. When initially activating the ghost portal he left disappointed when it didn't activate, forgetting that he installed the on switch on the inside of the portal, which was what caused the accident with Danny. Sometimes, he's had no problems going to wherever Danny is, unintentionally getting Danny in trouble or embarrassing him.

Jack is an adequate fighter with great (almost super human) strength (due primarily to his prodigious size) and courage as well as a good amount of technical knowledge, but acts clumsy and incompetent. However, he has a maturity and seriousness that few people recognize. Despite his constant obsession with ghosts, he loves and protects his family. Despite Jack's "oafish nature", he appears to be an accomplished inventor. Jack is often the one who builds most of the gadgets and equipment (and then gives them silly names) that are seen in Danny's house and the lab. However, he seems to have trouble using these gadgets while other characters such as Danny or Maddie (and sometimes Jazz) have no trouble at all. Jack is determined to prove the existence of ghosts but is completely unaware that his son is one. He also is often far too brave for his own good, as he is obsessed with ghost-hunting. He always has a ghost weapon on him (even when he isn't supposed to) (The Fenton Menace) or while bathing (Reality Trip ). Geared up in his day glow-orange spandex jumpsuit, (and he apparently breaks out in a rash if he wears anything else, as shown in The Fenton Menace) Jack always jumps into the action before thinking and usually makes a bad situation even worse. He has a level of genius though, able to conjure up working ghost gadgets and a massive ghost-defense system built all around the Fenton household. When it comes to ghosts, nothing else can stop him from trying to catch one and "rip it apart molecule by molecule" (this is the phrase he often uses to express his hatred of ghosts, thus scaring and worrying Danny greatly, for obvious reasons, every time he says it.). This is the main reason why his son has yet to tell his parents about his human/ghost hybrid status, as he believes they will not accept him. It also doesn't help that Jack is gunning for Danny Phantom more than any other ghost, though he has grudgingly accepted help from him before, namely to fight Plasmius (whom he calls the "Wisconsin Ghost"). Unlike most characters in the show, he can tell when he's been overshadowed, but it seems only when it's a malevolent force controlling him (for instance, Vlad), and not someone like Danny. Apparently, such ability only works when the overshadowed forces him to do something against his will. In Eye for an Eye, Vlad "forces" Jack to vote for him, which Jack already intended to do anyway. Jack is revealed to be very competent while fighting ghosts who put his family in danger. This occurred at least three times: first in The Million Dollar Ghost, when a single-handed Jack beats Plasmius and his ghost vultures to save the Fenton Portal from exploding; second in Reign Storm, when he used the unfinished Fenton Exoskeleton to defeat the Fright Knight and save Maddie, and third in Girls' Night Out, when he "saves" Danny from Skulker.

Danny and Jack have a close relationship. Danny appears to love and admire his father, although when it comes to protecting his ghost hunting and social life, Jack has proven to be more of a hindrance than a help. Danny is constantly embarrassed by his father in public, thanks to his over-the-top and jovial personality. Jack's passion for ghost hunting caused Danny to become ashamed of him and very quiet about his family's "hobby". Eventually, though, Jack begins to try to embarrassing his son and get him in trouble less often, still causing Danny grief on occasions, but not nearly as much. Jack wants his son to look up to him, so it pains him whenever Danny expresses a negative opinion of him, like in The Million Dollar Ghost. He also will punish Danny for his actions, too, sometimes grounding him. But Jack deeply loves his son, going to great lengths to protect him and his family from ghosts. 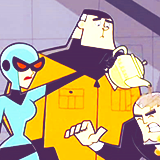 Add a photo to this gallery
Retrieved from "https://blossom.fandom.com/wiki/Jack_Fenton?oldid=16967"
Community content is available under CC-BY-SA unless otherwise noted.