The Hex Girls are a female eco-goth rock band.

The gang and Ben Ravencroft crashed Thorn and the girls rehearsal of Hex Girl. After that the gang and Ben decided to follow the girls and see if they have anything to do with the mystery they are trying to unveil. Fred and Daphne even suspect that they were real witches, after seeing Thorn performing a strange ritual. Later, it was revealed that what they saw was just a herbal mixture that Thorn had made to soothe their vocal chords, and they even explain that they were actually eco-goths, and that Thorn also was a real wiccan. They accompany the rest of the group in the search for Sarah Ravencroft's diary which was actually a spell book. Later on, Thorn was able to trap the ghost of Sarah back in the book by reading a spell out loud. A little while later, the Hex Girls, along with Scooby-Doo and the gang, performed Earth, Wind, Fire, and Air, for the townsfolk. Scooby and the gang find out that Thorn, Luna and Dusk were to open the Vampire Rock Music Festival in Australia. When they were in the middle of singing their opening act], the giant Yowie Yahoo and his three vampire minions capture them, and it was up to the Scooby Gang to find them. It was later revealed that they had been taken to the vampires' hideout and were offered by the Wildwind at the Great Barrier Reef scuba diving tour if they quit from the festival, to which they refused, so the members of the Wildwind let them to get out of that mess on their own. They eventually are able to come back to the place where the festival is being held, just in time to see the Mystery Inc. solve the mystery. They also join Scooby and the gang in their performance. The girls were in the Fortescu Castle in Transylvania, trying to shoot a music video on their latest song, when a vampire attacked them. The attack scared Dusk who barely got away and she tried to convince the others to get out of there before they got attacked again, but Thorn and Luna wanted to stay and try to finish shooting. This created an atmosphere of instability among the group. At this point Mystery Inc arrived after having been invited, and had to solve the mystery, while trying to prevent the girls from breaking up. In the end, Thorn, Dusk and Luna shoot a new music video, with the assistance of Scooby and the gang. 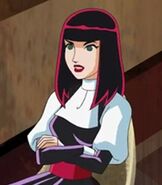 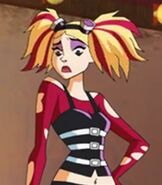 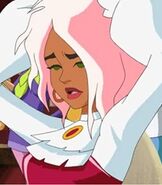 Add a photo to this gallery
Retrieved from "https://blossom.fandom.com/wiki/Hex_Girls?oldid=18257"
Community content is available under CC-BY-SA unless otherwise noted.